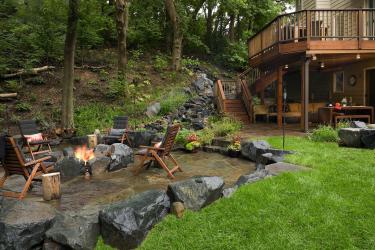 When the Renn family sits in their backyard in their Eagan neighborhood, it feels like they’ve escaped to the Northwoods.

“It reminds us of camping on the North Shore,” homeowner Toni Renn said. “We have a favorite spot right on the Baptism River where we wake up to the sound of the river.”

Other people like the Renns’ backyard too, so much so that it won an award.

The backyard’s architect from Southview Design won the 2017 “Going Native” award from the Minnesota Nursery and Landscape Association earlier this year.

Before the makeover, the Renns’ backyard was filled with sandy soil, it had erosion issues and little room to play.

“We can see the waterfall from almost every room in the house,” Renn said.

The sandy soil was leveled. A stream and a drainage system was installed to manage storm water.

“Eagan has sandy soil and if you put sand on a slope, there’s nothing holding it back,” Arnosti said.

The homeowners are lovers of the outdoors and they love to fly fish, but they don’t have a cabin for such an escape.

They also wanted it capture some of the natural habitat they’ve grown to love in Minnesota, so they used stone from the Boundary Waters.

The pond is populated with native fish such as perch and crappie.

Arnosti said she has never had a request to create a habitat for native fish.

Arnosti said people usually love the idea of using native plants in their landscaping, but not everyone in Minnesota likes the way they look.

“They’re used to cultivated plants that are neat and tidy,” Arnosti said. “Native plants tend to be wilder. They love the idea, but not everybody has gone whole hog. If people were to see this place, I think they’d change their mind.”

Wild, native plants tend to grow together and interconnect.

“It’s quite beautiful,” Arnosti said. “It’s like a wild prairie.”

She said people are starting to request more pollinating plants because they recognize why important they are to the ecosystem.

“Many of the plants, the flowering plants you’d think would attract butterflies, don’t attract the butterflies because of the way they’re bred,” Arnosti said. “The native plants truly attract the pollinators we need. They’re tricky to find. A standard nursery doesn’t always have them. But places like Bachman’s Nursery are growing them now.”

Steep slope transformed into a backyard inspired by nature. More than a patio! This design includes a backyard waterfall, stream, fire circle, and fly-fishing pond.

Meet with a Landscape Designer or Architect

Your perfect outdoor living space begins with a simple conversation. Let’s talk about your landscaping project!

What should I consider before installing a Landscape?

Ryan Slipka, President of Southview Design was featured in the Industry Advice column of MIDWEST HOME

MIDWEST HOME features this backyard renovation by Southview Design which maximizes outdoor living with an intimate patio, large play space, and more. It is also a 2021 MNLA Award winner.

Extending The Season for Pandemic-Safe Socializing

Southview families are turning to their outdoor spaces as a safe environment to host family and friends.