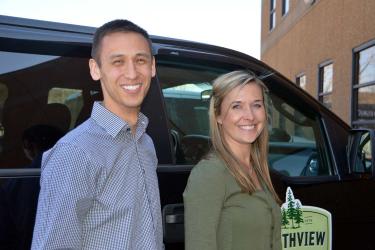 Landscape care representatives Jennifer Johnson and Jacob Hong heard the call of the outdoors at an early age but in different ways.

…joined Southview Design in 2014 and is a licensed commercial pesticide applicator. He manages accounts for retail centers and homeowners’ associations.

He was 13 years old when he and his brother decided a little cash in their pockets sounded like a good idea. Taking over the family lawn mower, they started mowing lawns for their neighbors. Jacob just loved being outside playing basketball, soccer, and he was on the track team in high school. He wanted to be an NBA player when he grew up. When he realized that was probably not in the cards, college presented him with opportunities that he hadn’t thought about. A friend suggested he work as part of BYU’s grounds crew mowing the soccer fields. He credits the professors at BYU as “the best professors he has ever had,” and they inspired his continued work in Landscape Management.

“They genuinely seemed to care about our futures and not just passing a class,” said Jacob. After completing a mission for his church, he returned to BYU to complete his studies. He would eventually like to make a trip to his ancestral village in China and several spots across the south Pacific. But for now, the landscape management tradition continues at home. His young daughter helps mom and dad with the backyard vegetable and fruit garden.

…joined Southview Design as a Landscape Care Representative in 2017. She manages and develops new opportunities for office, healthcare, and retail facilities, as well as homeowners’ associations.

The most satisfying part of her job is working with her existing and new commercial clients to improve their property’s landscape. She does that by giving her clients great customer service, utilizing Southview’s vast offering of resources, and making sure communication tops the client experience.

Jen grew up in a small town farming community in Michigan. Her summers were spent playing outside and helping her dad on her grandmother’s farm. Her parents were both educators, and she started college as an education major following in their footsteps. After realizing she wanted to try a different path, her best friend suggested she should try Landscape Design/Horticulture, and she was hooked. Jennifer loves being outdoors. She admits a desk is not for her. But to say Jen loves the outdoors is an understatement. In her free time, she travels as much as possible. Some of the places she has visited include Myanmar, Galapagos Islands, Switzerland, Costa Rica and Australia. She believes being open to new cultures and landscapes provides inspiration for her work. She also believes that experiencing new places helps give her an open and well-rounded perspective on life. Here at home, you’re likely to catch her biking, golfing, hiking, bowling, or playing broomball in winter. 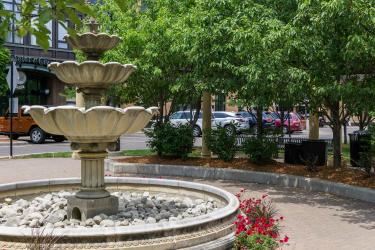 Southview Design is one of the largest and fastest growing landscaping companies in the nation. We offer an industry-leading warranty, construction know-how, state-of-the-art equipment, and a commitment to quality and customer service.

Over the last three years, we have seen a growing number of homeowners ready to invest in their outdoor living spaces. While many preferences have remained consistent, others have evolved and inspired a new era of landscape design trends.

Ready to Go for a Walk?

Freeze-thaw-freeze-thaw. Warm days and cold nights can make walkways, sidewalks, and driveways an icy mess. Here are our pro tips for keeping your pavement safe.

Step One: Collect the Sap

Eager for Spring? Making maple syrup in your backyard is a great way to enjoy the outdoors while you're waiting for the snow and ice to melt. Step one: collect the sap.